Two AIM alumni have already inspired AIM 4th graders to make their learning difference a competitive advantage. When the 4th graders began their first book discussion of the school year, they discussed the concept that a small idea can change the world. After reading the book, What Do You Do With An Idea?, students watched short TEDx talks featuring students of different ages whose ideas had made the world, or their community a better place.

Students were mesmerized seeing real students sharing their ideas, and were amazed when the final video was shown revealing students in AIM classrooms. The TEDx Solebury School video, Difficulty to Success, features Sophia Gross '16 and Andrew Rosenstein '17 sharing the story of their business Opportunity Rise which raises money and awareness for children with learning differences and their experience in Start-Up Corps, AIM's entrepreneurship class. Students were even more impressed to learn that Rosenstein, now a freshman at Babson College, published a book, A Millennial World, last year.

"When the video switched from the old school's classrooms to AIM's entryway and courtyard, the 4th graders literally cheered," said 4th Grade Teacher Eryn Doroshow. "They were so amazed by what Andrew and Sophia accomplished, and felt so inspired by the fact that AIM helped them to make their dreams a reality." 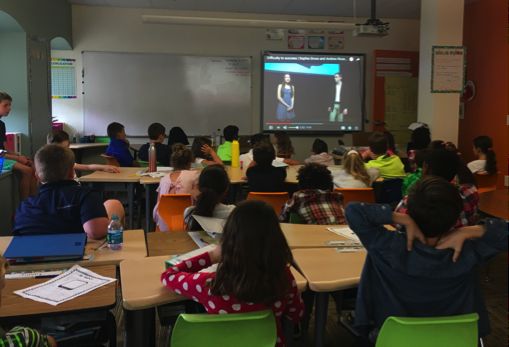