As AIM Academy students celebrated Sports Day as part of the 1-12th grade school's Spirit Week on Wednesday, they had the opportunity to hear words of wisdom from one of the Philadelphia-area's best known sports figures: Temple Basketball Coach Fran Dunphy.

Dunphy was the inaugural speaker for AIM's Department of Athletics and Special Programming's "AIM for Success Speaker Series" and shared with children his background and the advice and encouragement he gives to students interested in playing basketball at Temple. 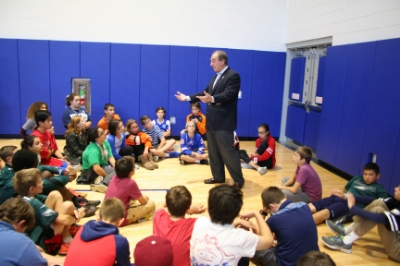 He encouraged students to be prepared and be accountable for their actions even when things are hard. "How you get out of trouble is going to set the bar for you as to how you're going to live your life," Dunphy explained.

Dunphy, who played basketball at La Salle University and began his college coaching career at the school, encouraged the audience to take the time to make interactions with others more personal.

"Use people's names. It says you care, and we all need to be kind, generous and caring," Dunphy said after sharing a story about his first introduction to legendary University of North Carolina Coach Dean Smith. During a La Salle game versus UNC, Dunphy was the last coach in the line to shake hands at midcourt before the game. As Coach Smith shook his hand, he called Dunphy by his name and said, "Have a great game tonight." The fact that someone as revered as Coach Smith knew Dunphy's name stuck with the young coach who said he has made a point of reading press books for games and memorizing coaches names so he can follow the same practice.

All of you at AIM Academy, you're a team," Dunphy told the students before answering their questions about whether he was ever going to retire and whether he could still play basketball. "The best thing about a team is you become teammates." 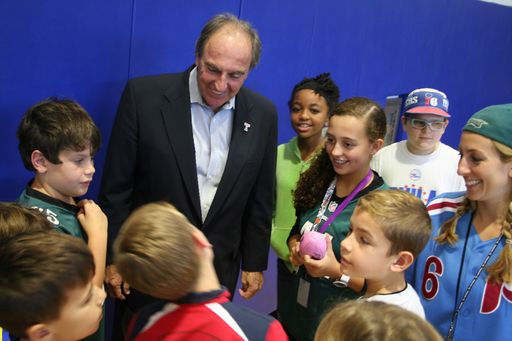